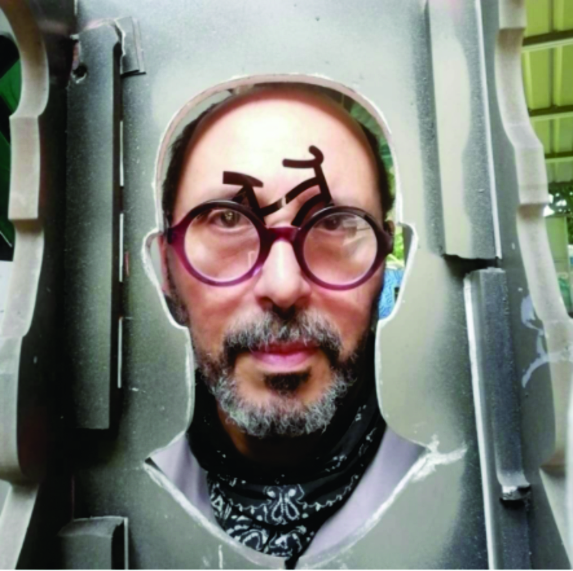 His academic training starts very early, at age 11 he attends the Drawing Academy Centro Higuera in Caracas, Venezuela. Later in the same city, he continued his formation attending the School of Plastic Arts Cristobal Rojas, institution in which within 3 years he goes through a variety of techniques and artistic experiences such as: drawing, paint, sculpture, engraving, photo, art of fire and ceramic, graphic design and art installations. Artists and teachers such as Alirio Rodríguez, Luis Guevara Tan, Edgar Guinand, Nedo Mion Ferrario, among others guided him in this early stage.

At the end of that period of his academic training, he decided to stay one more year in the institution to attend a special illustration and design class with teacher Abilio Padron. During that same year, he participates in the engraving workshop directed by the artist Consuelo Mendez at the Simon Rodríguez University, in Caracas, and also joins the Venezuelan theater movement, to learn about acting and about the contribution of plastic arts in theater (scenography, masks, makeup, costumes, puppets, image and graphic development of the theatrical productions).

During this academic period, the young artist learns from the experience and mentoring of people like Levy Rossell, he participates in workshops with acting figures such as Victoria Santa Cruz, who was at the time the Director of the National Theatre of Peru; Jacques Lecoq, a recognized mime artist and French acting teacher, considered a reference of the theater of gestures; Rodolfo Rodríguez and the Panamanian artist Adriana Molinar from the Repertory Theater of the Athenaeum of Caracas and the Mask Theater of Amsterdam, among others.

At that time, his professional/artistic life was shared between the theater and the visual arts. At one point, he decides to focus more on the visual arts and becomes a titular professor on this field working for the Ministry of Education of Venezuela. He also gets involved in a wide variety of independent projects like art exhibitions; art installations; editorial designing; illustrates for some of the most prestigious newspapers of the country; design developments for advertising agencies, and public and private companies, ONG’s and national universities. Among these, we can mention the followings: